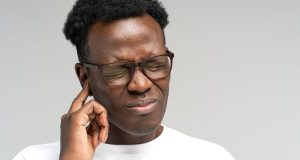 Tinnitus, often described as “ringing in the ears,” may take many different forms. Tinnitus is the term for any persistent sound that does not come from outside the body. Tinnitus might sound like ringing to some individuals, but it can also sound like buzzing, humming, whirring, whooshing, or even clicking to others.

We must look closely at the inner workings of the ear to learn more about this persistent ailment. We can better understand how to avoid tinnitus if we have a better understanding of how it develops.

There are two kinds of tinnitus.

Objective tinnitus, the less frequent of the two types, is brought on by a sound in the body near the ear canal.

Subjective tinnitus, on the other hand, is the more common kind of tinnitus. The sensation of sound in this circumstance is something only the person can hear. Although the person can hear the sound, it does not come from anywhere outside their body.

How does tinnitus develop?

Understanding the mechanics of hearing will help us understand how subjective tinnitus develops.

Stereocilia are tiny organelles that look like tiny hairs. They are found in the cochlea of the inner ear and are responsible for detecting small changes in sound. They pick up vibrations from the environment and turn them into electrical impulses that can be sent to the brain. Each one can only pick up one frequency, or pitch, of sound when it is working right. The stereocilia are sensitive, which is what lets them hear the sound, but it also makes them easy to get damaged. In cases of hearing loss, the stereocilia may get damaged and “turn off” for good.

In the case of tinnitus, however, one or more stereocilia may sustain damage that renders them permanently “on.” Only the person can hear this continual experience of sound, which happens within the ears.

How common is tinnitus?

Thirty per cent of individuals will have tinnitus at some time in their life, while 13% of UK adults — or more than 1 in 8 — suffer from permanent tinnitus.

One in ten persons with chronic tinnitus will discover that it significantly lowers their quality of life.

People with hearing loss (often brought on by ageing or exposure to loud noise) or other ear issues are more likely to have tinnitus, while it may also affect those with normal hearing.

Is there a treatment for tinnitus?

There is no known treatment to restore the functionality of these stereocilia if they have been twisted, fractured, or otherwise destroyed, similar to sensorineural hearing loss. However, increasingly better treatment methods are available to lessen or even eliminate tinnitus noise. There are several DIY at-home remedies for tinnitus.

A person with tinnitus may experience the most prominent symptoms before sleep. More individuals hear tinnitus most when it is pretty quiet. Some individuals prefer to sleep with a fan running in the background or a white noise machine to muffle or distract from these noises. Some people find comfort in employing a natural sound machine or background television playing at a low level to block out their tinnitus symptoms. Sometimes a tone might be found within the range of frequencies that will completely mask tinnitus.

While these treatments may provide some comfort, we can offer more sophisticated therapy. The frequency of tinnitus sounds may be efficiently cancelled out using some of the latest hearing aids.

The connection between hearing loss and tinnitus

Many people have hearing loss in addition to tinnitus. Similar to how specific stereocilia may be destroyed so that they take on the “on” position, other stereocilia can also be damaged so that they take on the “off” position. Tinnitus may be a clue that you may benefit from a hearing test if you have it. Some frequencies may no longer be audible to you, but you might not be aware of them.

If you experience tinnitus, get a hearing test as soon as possible. The route to therapy for both illnesses begins with this test. Call us right now to make an appointment!

Soundhearing.org is a company that works within and around the M25.

Our purpose is to provide high quality, transparent and affordable hearing care.

Our website outlines every product available on the market from the main hearing aid manufacturers. We provide detailed descriptions of each hearing aid and its features allowing you to compare hearing aids from each range.

Unlike many high street providers, we are not owned (partially or wholly) by a particular manufacturer, which is why we can offer you the choice of hundreds of hearing aids.

To help you make the right choice, feel free to contact us for advice and to answer any questions you may have.  An audiologist can also come to your home free of charge in order to assess your hearing and your listening needs.